François Gagnaire is certainly the best ambassador of the Velay in Paris. In his gourmet bistro Anicia, which he opened in 2015 as a tribute to the city of Le Puy-en-Velay, he puts the spotlight on must-have products like the green lentil of Le Puy, to a clientele of businessmen and tourists. Rue du Cherche-Midi, a stone's throw from Montparnasse, and a few meters from Christian Etchebest's restaurant and Cyril Lignac's pastry shop, he managed to seduce Parisians with the authentic products of our region. Interview…

How did you live your course from Puy-en-Velay to Paris. What were the most memorable moments for you?

What was most difficult was making the decision to leave because it was not about me alone. It was necessary to leave on a new life with my family, and all the team that I had in my restaurant in Le Puy-en-Velay, except my manager of room with which I kept very good relations. I kept a certain nostalgia about Le Puy-en-Velay, and especially during the end of year celebrations.

I had three months to decide, and I had several proposals. My team followed me to the Hotel “The Collector” in Paris, it could be integrated in the dining room and in the kitchen, but I spent 97% of my time in front of a computer to manage and participate in meetings, as head of department and member of the management committee. I was no longer in the kitchen to showcase quality products. “The Collector” was an airstrip for me and my team. From there, we decided to start again on a personal project in a bistronomic spirit. It was not easy to invest in Paris. It took a long time to find the right address.

Why did you choose to cook the products of our region in Paris ?

We decided to propose the same cuisine at the restaurant of Puy-en-Velay, but in a more relaxed spirit. We use local products, but we do not offer a rustic kitchen. We put, for example, the value of the Puy-en-Velay lentils, but in an original way.

Which dishes are identified “Haute-Loire or Velay” on your menu ?

We made the “Caviar du Velay” that we had created at Puy-en-Velay, a recipe that has been pumped by several starred chefs, but it is rather an honor. We always propose “The flower pot to the lentils”, we also have the lamb mouse confit with the Black Velay, the calf of Mont du Velay, the fat end. We can offer a sweetbread of “Vedelou” with scallops. There are many dishes that we made in Puy-en-Velay and that we associate with other products. 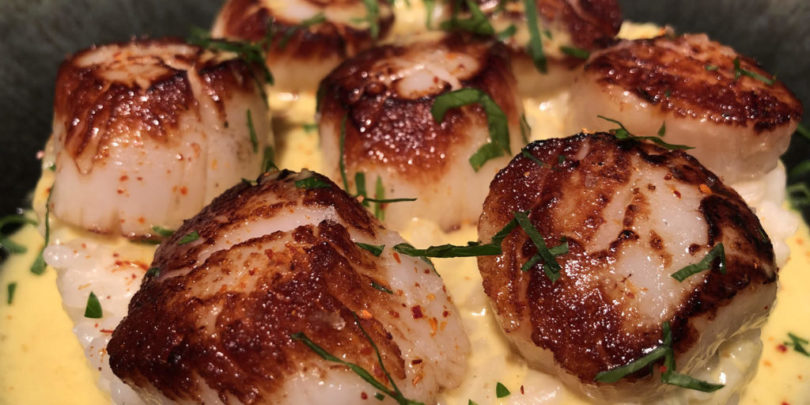