The Roche Martine is a rock of a very impressive size and the stuff of many legends! 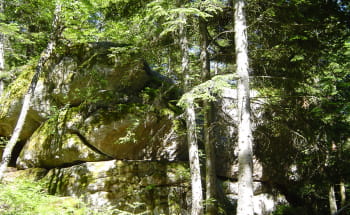 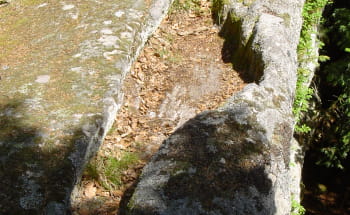 A natural or partly assembled rock formation, about 6 metres high and 12 metres wide.
At the summit is a deep rift shaped like a spoon and surrounded by a series of discreet cupules. A crevasse the size of a human being lying down has fired people's imaginations. Was this a sacrificial site? It was first a pagan site that was later taken over by Christians. The rock formation stood alongside two vast stones supporting each other in an upside-down V shape. Behind the Roche Martine site itself, about 300m away, is a large embankment covered by leaves and formed by layers of flat, semi-vertical stones that generally taper to a point (leaf-shaped).
The most popular legend says that Robert de Turlande, the founder of the Chaise-Dieu monastery, threw an axe from the rock, which landed where the monastery was to be built.
Nearby are the ruins of a former 12th century Benedictine priory (abandoned in the 17th century) and probably the trace of a Roman road, which later became a forest path.