900 km from Mont-Saint-Michel to Saint-Michel d'Aiguilhe. What an adventure! The trail has revived the old section on the Way of St James along which pilgrims once came from northern France and even further afield, reached Le Puy-en-Velay and then set off to Santiago de Compostella.

The brand-new GR300 trail now goes through the Velay region and Haute-Loire. Arriving from northern Allier, the GR300 was interrupted at Clermont-Ferrand, but now the trail continues all the way to the Saint-Michel d’Aiguilhe rock.

Le Puy-en-Velay is at the crossroads of several major hiking routes, and now a new face has joined them. The GR300 begins from the Saint-Michel d’Aiguilhe rock before making its way to Polignac, Le Collet, Le Moulin des Estreys, Les Estreys, Grazac, Chazelles, Pralhac, Loudes, Cereix and St Jean de Nay. 25 km to start hikers off along the Way of Saint Michael, and then leading them towards Langeac, Brioude and Le Puy-de-Dôme.

Imagine… 2 million years ago, a volcanic peak standing 82 metres high like a vast chimney about to erupt. Between the sky and the earth, like Mont Saint-Michel, Saint-Michael’s chapel was built on top of a lava spine! It looks down from the peak of a volcanic plug, from a unique and vertiginous “mountain”.

There are 268 steps leading up to the top, to the threshold of a chapel built in the year 962. With a 360° view over the Velay region and Le Puy-en-Velay, the starting point for pilgrims setting off on the Way of St James.

Each year, almost 70,000 visitors come to a site where nature and mankind meet. 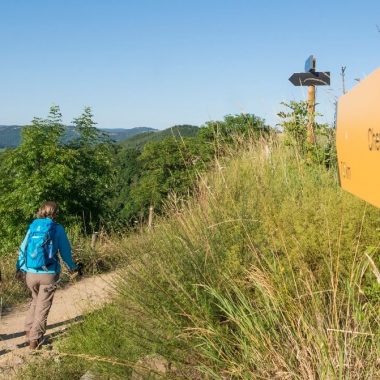 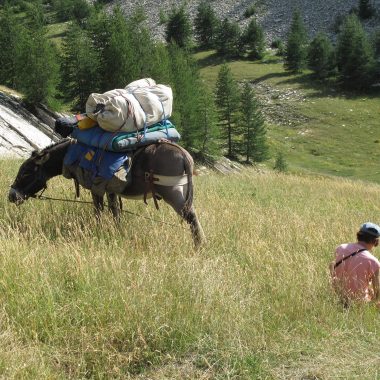 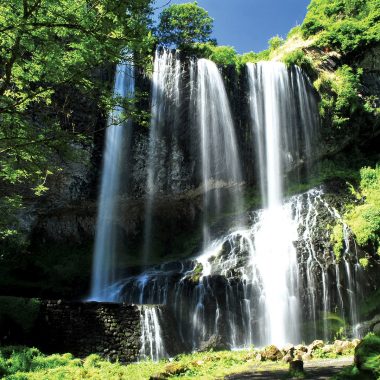